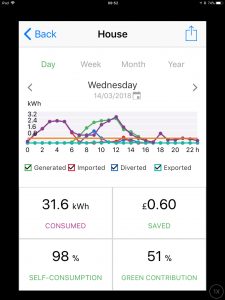 On Wednesday an unusual pattern of vehicle use occurred (at least for me) which showed another way the charger could be used. I needed to take my daughter on a round trip in the morning (dad’s taxi), return home, and then repeat the trip later in the afternoon. Each round trip pretty much exhausted the range of my electric car, so I needed to recharge in between. My normal home charge routine would have prioritised the home storage battery, but that would have left me completing the second round trip partially on petrol which isn’t the optimum solution.

To fully recharge the vehicle to complete the second round trip (and thus avoid using petrol) I disabled the programmable logic controller (PLC) on the car charger using a push button which suspends the program causing the charger to operate at full power. It was a sunny day (at least for March) so the solar panels were producing a similar amount of power to that required to charge the car and, with the fixed battery partially charged during the period I was making the first round trip, the fixed battery was able to manage the difference between power generated by the panels and that required by the home (including car charging) for much of the period.

The result was an almost fully charged car for the second round trip (sufficient to avoid using petrol) for only around 1kWh of grid energy.