Today is my first day with the car plugged in all day since I completed the variable charging which directs the car to charge at 0, 6, 10, or 16 Amps depending on availability from my solar panels. 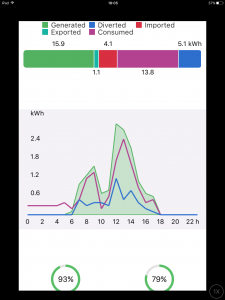 The green area shows the electricity generated by the solar panels. The purple line shows the demand for electricity – the larger changes are the car charger switching on and up/down. I myself witnessed it switching between 6 and 10 Amps while working in the garage. The blue line shows the second priority – electricity being used for water heating. The water heating control is more dynamic and adjustable in finer increments so it mops up what the car charger cannot. 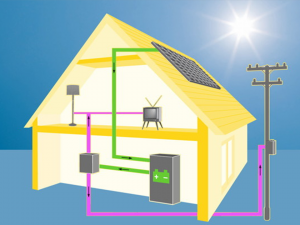 I’m now 2 years into my Ampera ownership. My average fuel economy is 207 mpg reflecting the fact that most of my 8,000 miles per year is driven on electricity, indeed I think that I last filled up with petrol in January and it’s now August. I have about 60 miles worth of petrol left which may see me into September.

Most of my mileage is of course powered by electricity. Domestic electricity is much cheaper than petrol anyway, but much of my charging (particularly in summer) is free because I use my own solar power. Obviously the solar system itself is not free, but the money it earns from generating electricity and supplying it to the grid does not depend on what I actually supply to the grid or how much I use. It makes no difference to my revenue how much of the electricity that I generate goes into the grid, making my energy costs when using my own electricity zero.

My charger control project describes the development of a solar-powered charger which, in its current form, charges the car at a variable rate depending on output from my solar panels. When the output of the panels is too small to charge the car, or there’s a small surplus while charging the car, or the car is not plugged in, then any surplus solar power is diverted to the immersion heater; but when the car is plugged in then its charging is prioritised over hot water. That priority reflects the relative costs: night time electricity that I would otherwise use for car charging costs me around 8 p/kWh, while gas that I would otherwise use for water heating costs me only around 3 p/kWh. Thus every kilowatt of solar electricity used to charge the car that otherwise would have been exported saves me 8 pence; while every kilowatt used for car charging that otherwise would have been used for water heating saves me around 5 pence. Those savings might sound small but I’d estimate that I’d otherwise buy around 2,500 kWh of electricity annually for charging the car (around £200 at night rates) for car charging – far cheaper than the equivalent distance in petrol but £200 is still money worth saving.

For some time now my car charger has been linked to my solar panels so that it automatically turned on when enough surplus solar power was available enabling me to charge my electric car for free. This has helped me get up to an average of 70% of my generated electricity being used my me rather than export to the grid.

The latest refinement is intended to help me increase that beyond 70% while charging the car more quickly and reducing my use of bought electricity. 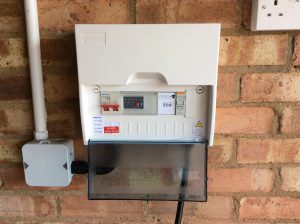 The new refinement allows the charger to switch between 0, 6, 10 and 16 Amps rather than simply off/on between 0 and 6 Amps. I needed a new case to get all the bits in, but the main technical difference is the use of a Programmable Logic Controller (PLC) to determine the desired charge rate.

The PLC is programmed from a laptop via a USB lead to create a programme in ladder logic which combines inputs (currently export threshold and contactor closed) with timers to switch on one of four different outputs corresponding to the four different charge currents (0, 6, 10 and 16 Amps).