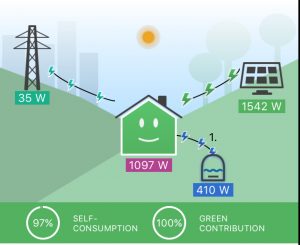 Here we have the system in action earlier today.  With 1542 Watts coming from the solar panels, the house (including the PowerVault storage battery) is running at a maximum of 1097 Watts, with the balance of the available power controlled by the ImmerSUN- 410 Watts to water heating and at the point of this snapshot 35 Watts into the grid.  At this moment that’s 97% of generation used as such self-consumption and 100% of energy being consumed coming from the solar panels.

if the ImmerSUN had priority then it would have taken all the available power leaving nothing for the PowerVault storage battery. 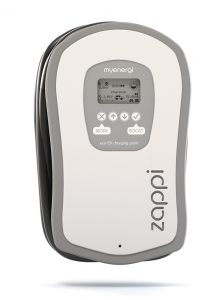 It’s now over a year since I built my solar-powered car charger which is enabled automatically by surplus electricity output from my solar panels, but can also be run on a timer when required to use cheap night-time power too.

However since then a new product has come to market from myenergi (a new company led by some of the team responsible for developing the ImmerSUN) which provides the same sorts of capabilities although in a professionally-produced solution. I don’t own one, I’ve never used one, but I think that this is a solution which I’d be seriously considering if I hadn’t already made something similar.

The only downside that I can see is that it’s available in either Type 1 or Type 2 forms with tethered leads only, so if you have a mixture of EVs then a single Zappi may not be compatible with all your vehicles; whereas a charger with a Type 2 socket outlet would be.

You can learn more about Zappi here

In a prior post I described the use of current clamps to prioritise smart loads that are enabled by surplus solar power to maximise self-use of this ‘free’ electricity.  That’s free in the sense that a deemed export tariff doesn’t pay any more for an extra kWh exported, or pay any less for an extra kWh used, and so the marginal cost of using that (and every other) kWh is zero.  In that post three current clamps were visible in the picture – though I described only the function of the right-most.

In fact my home currently has 6 current clamps which is probably more current measurement than the substation that supplies my area.  The six clamps are as follows:

I’ve tried to distinguish between their functions as follows:

So the 6 clamps are:

This week I was discussing how to maximise the benefit of self-consumption with an installer.  The issue here is, where one has multiple independent systems (such as a battery and a water heater) each looking to use any surplus self-generated electricity, how does one set the priorities of the devices or is it just a lottery which gets the surplus power first?  In my own case, for example, I recognise that the surplus invested in my battery storage  is better value than investing that surplus in hot water as electricity is considerably more expensive than gas. 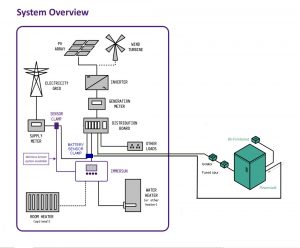 I have previously written on this subject Prioritising the battery, but the installer was unaware of my solution and recommended an alternative which I consider flawed. The solution recommended by the installer is to enter the maximum charging power of the battery as the export threshold in the ImmerSUN controller. This does indeed create headroom for the battery to charge, but I believe does not use the ImmerSUN to best advantage. Let me use a table to contrast what might happen at 3kW generation with both the installer’s and my own solutions:

The installer’s solution will potentially always waste an amount of power equal to the maximum battery charge power / ImmerSUN export threshold. My solution doesn’t do this, although there is an aspect of immersion heater operation that may or may not concern you. 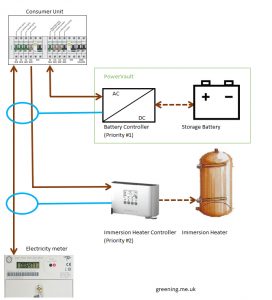 The effect of this arrangement leaves the ImmerSUN acting normally – it sees any export and diverts it to hot water.

The current clamp for battery however sees the sum of the export current and the current diverted to the immersion heater, so it doesn’t matter how much the ImmerSUN diverts (and thus reduces the export) – the battery ‘sees’ what would have been exported without the ImmerSUN and responds according.

The ImmerSUN clamp then ‘sees’  the export current drop as the battery charge current increases and  thus reduces its own current proportionately.

To gain access to both the incoming live mains supply cable and the outgoing live feed to the immersion heater, my current clamp is located within the consumer unit.  It’s the blue clamp on the right around the larger incoming cable and the smaller brown cable for the immersion heater.  You need to be a competent person to work inside a consumer unit.  (There are two further blue clamps to the left but their function isn’t relevant to this post.)