Well, with a bit of tinkering, my solar car charger is working with the charger turning on automatically when the output from the solar panels is sufficient, but I already have in mind a few improvements. 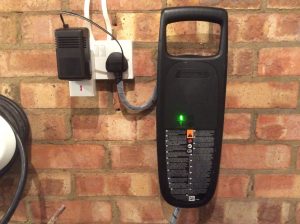 My intention is that the result of this is that in response to a jump in available power the controller will slowly ramp up the output to meet the availability and then slightly cycle the analogue output as the ImmerSUN output cycles on and off. The vehicle will respond by cycling between the currents immediately above and immediately below the available current. As an alternative strategy it can be configured to cycle just below the available power, and thus theoretically not import any power from the grid, at the expense of not fully using the available solar power.

Which ever strategy is used the more highly dynamic water heating will continue to mop up any available power between what the vehicle takes and what’s available from PV.