This weekend I finished my radio-controlled charger.

You may recall that I wanted to link the charging equipment for my electric car to my solar panels so that the car automatically charged when there was enough power from the panels. I’d previously settled on a simple on/off system charging at 6 Amps (the minimum setting) since analysis had suggested that this would maximise energy transfer as it seems to be more important to charge for the most hours than, for example, charge at more current for fewer hours.

It seemed that I would be easily able to configure my ImmerSUN to turn the charger on and off using its Relay: Export Threshold feature but I wanted to extend control to my car in the garage some way from the ImmerSUN without running a cable so far. 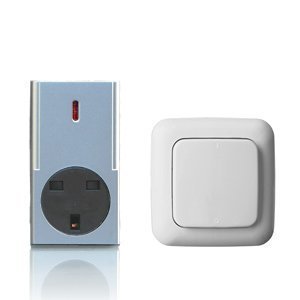 My solution was to make use of a HomeEasy remote control light switch and remotely-controlled switched socket (available on Amazon for example). The switch is designed to send a radio signal up to 30 meters to operate the socket – a range of transmitters and receivers are available separately which can be paired by the user. 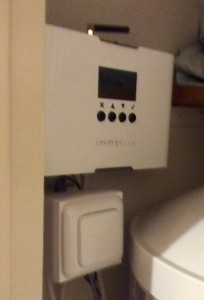 When I dismantled the switch I found that in normal use the operation of the rocker operated two pushbuttons – one for on and one for off. I removed the pushbuttons from the circuit board and replaced them by cables to the relay outputs of the ImmerSUN. At the same time I reasoned that the button cell in the transmitter might not last very long in service, so instead I repurposed an old mobile phone charger as a power supply. The mobile phone charger was notionally 3.6 Volts, rather than the 3.0 Volts of the button cell, so I also added a simple voltage regulator chip and smoothing capacitor to ensure that I didn’t damage the transmitter from any over-voltage.

If you simply wanted to switch some mains powered device then you’d need to do little more than plug it into the remote-controlled socket to be able to switch it on and off automatically, but for my car charging equipment I wanted to do something a little more sophisticated. I had previously decided to interrupt a low voltage control signal so that the charging system turned on and off gracefully as if the user was engaged in the normal process of stopping and starting charger rather than forcibly turning the power off as if there was a power cut. To this end I fitted a small mains relay inside an empty case intended for a small power supply like those used for a mobile phone, so that when power is turned on or off volts-free relay contacts open and close. These contacts are wired in series with a push button that normally starts or stops charging so that, as far as the car and charger are concerned, the button release that indicates ready-to-charge doesn’t happen until there’s enough solar power available (by default).

I also have the option to manually enable charging or set up a schedule from the ImmerSUN for times when there either hasn’t been enough solar generation or the car isn’t home long enough to benefit from it.

All I need now is a reasonably sunny day when the car is at home to try it.

1 thought on “My radio-controlled car charger”