Solar panels can generate significant amounts of electricity for example on March 25th our 4kW panels generated 22.4 kWh over the course of the day as shown. 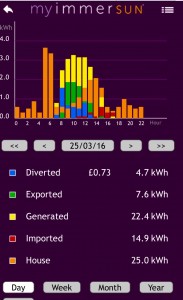 This generation typically substantially exceeds the load being drawn by the house leading to export of electricity to the grid – 12.3 kWh in this example or more than half the generated energy.

Moving loads such as the washing machine or dishwasher from night to day can help use this electricity, but done to excess risks increasing day time electricity import if changing cloud cover or other factors reduces generated power. The varying power demand from such devices is also unlikely to coincide the the surplus power available leaving some unused surplus. I was thus pleased to come across the ImmerSUN system. 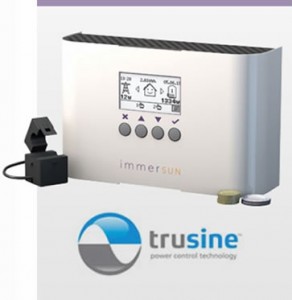 The ImmerSUN is a device which diverts surplus power to a range of possible consumers such as an immersion heater. It has a current sensor that measures any surplus power being exported and then diverts a similar amount of power into the immersion heater. Normally of course an immersion heater is either on or off, but the ImmerSUN provides proportionate control between 0 and 100%. It can control several devices diverting power to a lower priority device once, for example, a higher priority immersion heater has raised the water temperature to the set point and power for that purpose is no longer required. In the top illustration the blue bars show 4.7kWh being diverted into water heating (and thus reducing my gas bill) that otherwise would have been lost to export.

At the time of writing if you order online quoting Referral Code 206505 you will receive £25 in department store discount vouchers or a free system upgrade to remote monitoring.

1 thought on “Maximising use of your PV electricity”