Last night I made a small update to our heating system by adding some smart radiator valves. I’d been thinking for some time that there were efficiencies to be made regarding what rooms were heated when. Until now we’ve had a 7 day heating timer (so we have different heating schedules on weekdays and weekends) and thermostatic radiator valves (so we can set specific temperatures in each room) but now we’ve gone a step further. 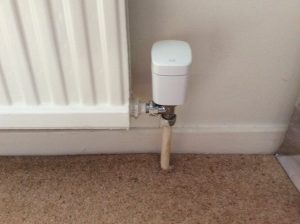 These days there are in my opinion three types of radiator valves: 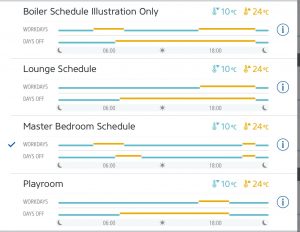 In my case I identified 3 rooms (5 radiators total) in which I thought that the typical usage was different enough from the house as a whole to warrant smart valves. For the purposes of illustration only, I’ve also added the schedule for the boiler timer although this is programmed independently of the radiator valves. The three rooms are:

The chosen smart valves are Elgato Eve Thermos which are Apple HomeKit compatible but are also configurable via Elgato’s own App; but not configurable via non-Apple devices. I initially tried setting up the required sequences via timed scene changes, but couldn’t see an easy way to schedule both workdays and days off; so I ended up downloading schedules directly into the valves via Elgato’s own App. This allows different schedules to be established easily for both working and non-working days with a schedule to identify non-working days set in as a calendar in my iPad. It’s easy to set up a recurring schedule for weekends and then other dates like bank or school holidays can quickly be added. Vacations when we’re away from home are still set up via timed scene changes.

1 thought on “Internet of Things”