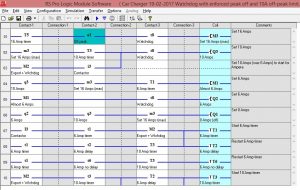 Part of the ladder logic program in the PLC

This afternoon I’ve spent a little time working on the charger. The charger stopped working on Monday after the power was interrupted for an hour or so while other electrical work was completed. A quick check at the time concluded that the radio link between the immerSUN and the charger had stopped working, and that the problem wasn’t a fuse, but other time commitments prevented further investigation until now.

Fortunately lack of the control signal doesn’t prevent car charging as I can disable the integral PLC (which leaves the charger on continuously) and allow the car’s internal timer to control when the car charges.

This afternoon I’ve successfully re-paired the receiver to the transmitter to restore normal charger operation and uploaded my latest software to the PLC.

The capabilities of the charger are now as follows: