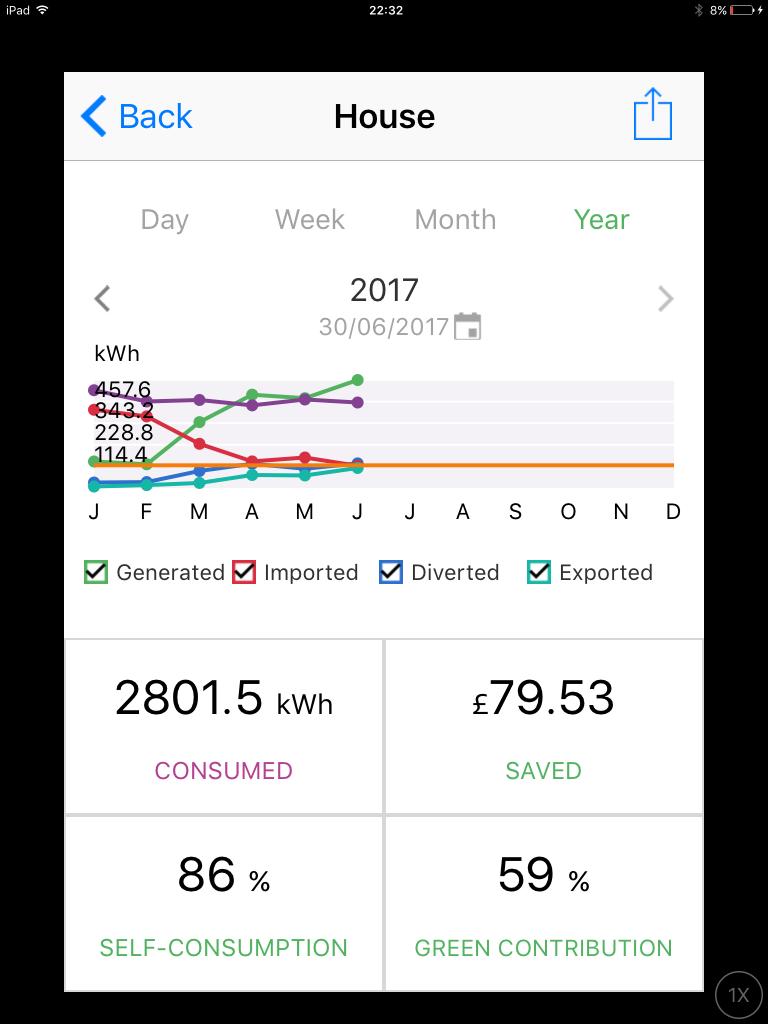 Now that we’re half way through 2017 it seemed appropriate to have a look at energy usage from the solar panels – especially as those six months reflect the first six months with the battery storage system.

The graph is taken from my ImmerSUN smart controller which automatically diverts surplus solar electricity to the car charger or immersion heater.  The battery storage system has independent controls but its benefits can be seen via the ImmerSUN.

The green line shows the generation of electricity from my solar panels.  Not surprisingly output is lower in the winter, but from April we generate more electricity than we use despite our relatively high consumption.  In principle we could be electricity independent during those months but for the time of consumption not matching the time of generation.

The red line complements the green line as it shows the import or purchase of electricity from the grid, and thus reduces as the generation rises.

The blue line shows the diversion  of electricity to heat water via the immersion heater when neither the battery storage system nor the car charger can absorb the available electricity.

Finally on the graph the turquoise line shows export of electricity to the grid when all smart capability within the house to use electricity is exhausted i.e. battery storage system at maximum power or full, electric car battery full or absent, and water in cylinder is hot.

‘Savings” at £80 refer only to the value of the water heating achieved from solar electricity versus buying electricity (although our backup is mains gas).

“Self consumption” at 86% refers to the proportion of solar panel output used i.e. not exported to the grid.

“Green contribution” at 59% refers to the proportion of total electricity consumption (excluding water heating) derived from the panels rather than from the grid.