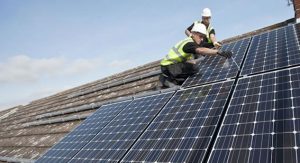 We’ve now had our solar panels for 1 year, so it would seem time for an update on how things are going. Our 4kW SSE-facing system has an expected annual generation of 3,668 kWh. However after a year in service I’m pleased to see that we’ve generated 4,056 kWh – 10% more than expected.

The financial returns on a solar PV system are a combination of 2 things: (i) payments from your chosen electricity company for energy generated and exported to the grid and (ii) savings from not having to buy so much power as you use that which you’ve generated instead.

When it comes to payments from the electricity company, my electricity company (like many) chooses not to go to the expense of installing an export meter and instead assumes that half of the power which I generate is exported to the grid. The total annual revenue for the first 12 months of operation, including both generation and export (assumed to be 50% of generation) is £629.62.

Finally, there’s the question of how much gas I save by making hot water from solar PV electricity rather than gas. Since March I’ve used 813 kWh or 27% of the generated power for water heating, so for a whole year 27% of 4,056 kWh is 1,095 kWh. The immerSUN itself records 995 kWh used for water heating since December. I’m also going to assume that not all the heat from the gas boiler would have ended up in the tank as hot water since some is lost via the boiler flue to the outside world, and some is lost via the pipes to the inside of the house – so let’s say 80% efficient on gas. 1,095 kWh @ 3.01 p/kWh @ 80% efficient = £41.20.

The tariff scheme will have provided me with about 20 years of income by the time it closes, so the investment in the panels, as well as helping me reduce my carbon footprint, will have generated 12+ years of profit having paid for itself during the 8th year.